The boundary between the Earth’s crust and the mantle has been defined as the Mohorovičić discontinuity or known for short as the Moho. This boundary interface involves a large change in both velocity measured directly using refraction data and density contrast measured using gravity data. Due to this contrast, undulations in the Moho surface generate anomalies of regional scale producing gravity gradients that can conceal and hide geological features of interest. Therefore, gravity anomalies sourced within the sedimentary section must be enhanced by: 1) removing the gravity effect of the Moho surface, and 2) attenuating the gravity effect of shallow topographic features; and what remains is a crustal model that reflects gravity anomalies of exploration significance from the Earth’s surface to the base of the crust.

The surface which separates the Earth’s crust from the mantle can be configured by seismic or gravimetric methods. The seismic method is expensive and suffers the scarcity of available seismic data. On the other hand, the gravity method is less costly and regional gravity public domain data sets are easily accessible. The interpretation of the surface using gravity is carried out in three steps:

a) compute an estimated depth-to-Moho surface using Airy-Heiskanen model,
b)incorporate the surface as a layer in a regional 3D gravity EarthModel, then invert on the Bouguer gravity field, and
c) calibrate and adjust the inverted depth surface to available refraction or reflection data sets.

After completing this Module, you will be able to:

As a reminder, the Earth’s concentric four prime layers are: the crust, the mantle, the outer core and the inner core. These layers or shells differ in depth, volume and density. The densities vary both laterally and with depth. The volumes are as follow: crust 2%, mantle 80%, outer core 17% and inner core 1% of the Earth’s volume. The crust is composed of oceanic and continental crusts. The oceanic crust is about 6-12 km thick, and the continental crust averages about 36 Km with a maximum thickness of 90 km in Tibet. The 2% crust floats on the mantle by virtue of the isostasy principle.

Understanding the nature of isostatic mechanism has been an endeavor for Geoscientists since the concept of crustal balance had been introduced along with the term “Isostasy” to accompany it. The word “Isostasy” means equal pressure in the Greek language. In brief, the principle of isostasy states that the lighter crust floats on the dense underlying mantle. When a certain area of lithosphere reaches the “state of isostasy”, it said to be in isostatic equilibrium. The depth at which isostatic equilibrium prevails is called the compensation depth. The principal also provides an explanation to why longer wavelengths of the Bouguer gravity field correlate inversely with the longer wavelengths of the topography; the principle suggests that loads on Earth surface caused by topographic features are supported at depth by deficiencies in mass as if the crust is floating on a denser material. These deficiencies in mass under topographic loads are referred to as compensating masses or roots. This can be visualized as the mass of the topography above sea level must equal the mass deficit caused by the root below the average crustal thickness. A good first approximation of the average crustal thickness is the depth to the base of the local crust where the overlying topography is at or near sea level.

A gravity based crustal model may be defined as a waveform model where long-wavelengths caused by either thick or deep seated sources and short wavelengths associated with thin or near- surface sources have been attenuated. This is a structure model where gravity effects of both water/sediment (bathymetry) and crust/mantle (Moho) interfaces have been isolated and removed.

In geological terms, the gravity crustal model is the structure of a floating slab of material between the Earth’s surface and the Mohorovicic discontinuity (Moho). The slab is an amalgamation of soft and hard sediments, igneous intrusions, upper and lower crust and upper mantle.

The primary objective of this module is to show how to derive a calibrated and adjusted depth configuration map of the crust/mantle discontinuity (Moho). The steps required to achieve this goal are:

An example of this procedure to calculate and interpret a crustal model follows for an area in Tanzania (onshore and offshore). 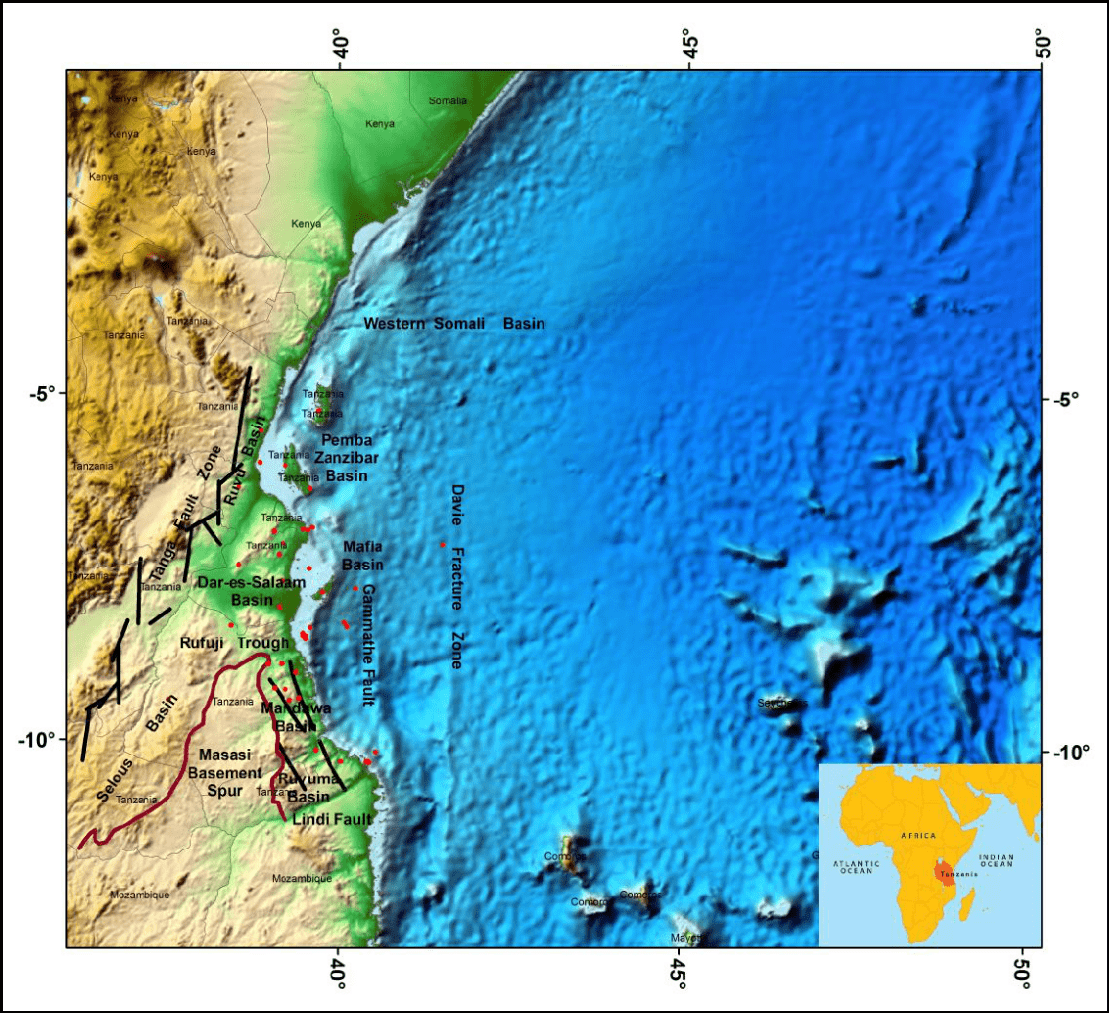 Scripps Oceanographic Institute (Sandwell et al) has been providing the industry with satellite- derived marine gravity data which has been collected through several satellite missions, such as ERS-1, Geosat and Topex/Poseidon. These datasets are periodically reprocessed and enhanced to provide the scientific community with better products. For this Moho interpretation example, we are using version (20.1) based on 1×1 arc-minute spatial grid resolution.

The Free-air gravity anomaly map (Figure 2) contains major anomalies generated by the large density contrasts of the topography and the water/sea bottom interface as well as at the top of the crust/mantle interface. These anomalies are often of regional scale and strong enough to distort or overwhelm other anomalies that can provide a useful structural interpretation. Therefore, anomalies sourced by geologic features within the sedimentary section or basement must be enhanced for interpretation by attenuating gravity effects of water/sea bottom and crust/mantle interfaces. The gravity effect of water/sea bottom is removed by converting the Free-air gravity to Bouguer gravity (Module #22 3D Bouguer Correction) and the crust/mantle effects by removing the gravity effect of the Moho. Both procedures are discussed below. 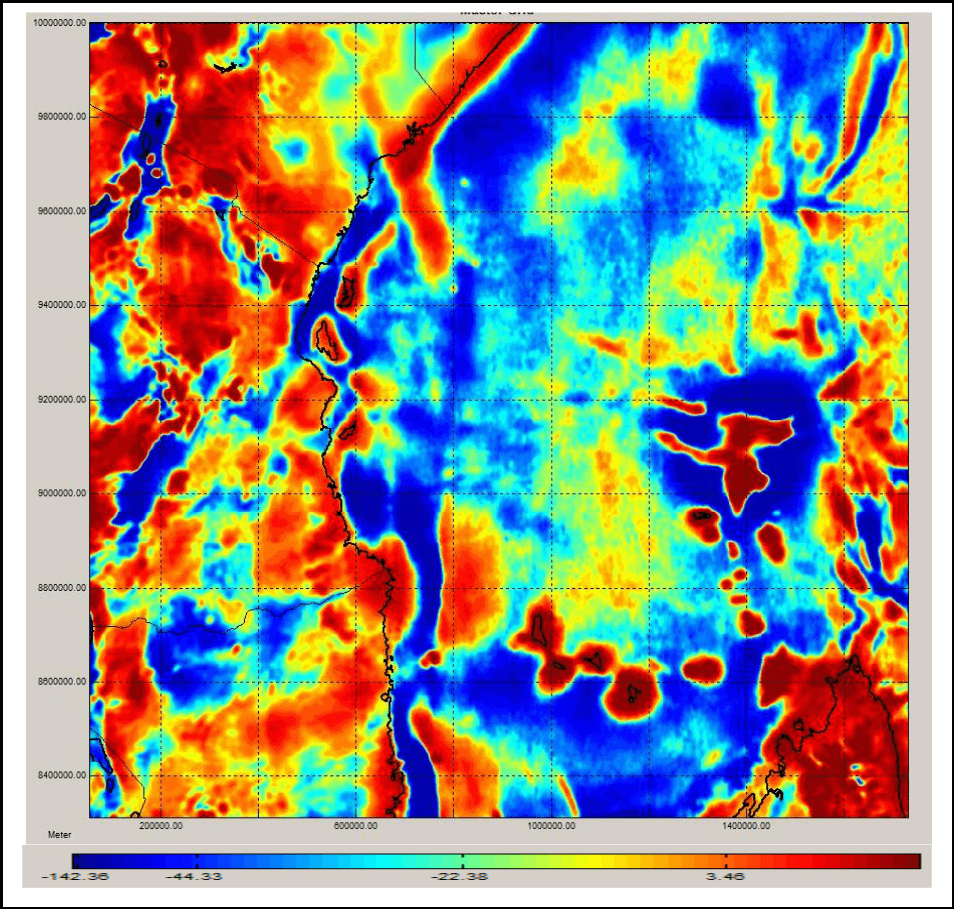 The bathymetry/topography data (Figure 3) was collected concurrently with the satellite-derived marine gravity data. Scripps Institution of Oceanography has also reprocessed and enhanced the data to provide an essential understanding of mantle conviction patterns, plate boundaries and distribution of volcanoes. Version (15.1) is used here. 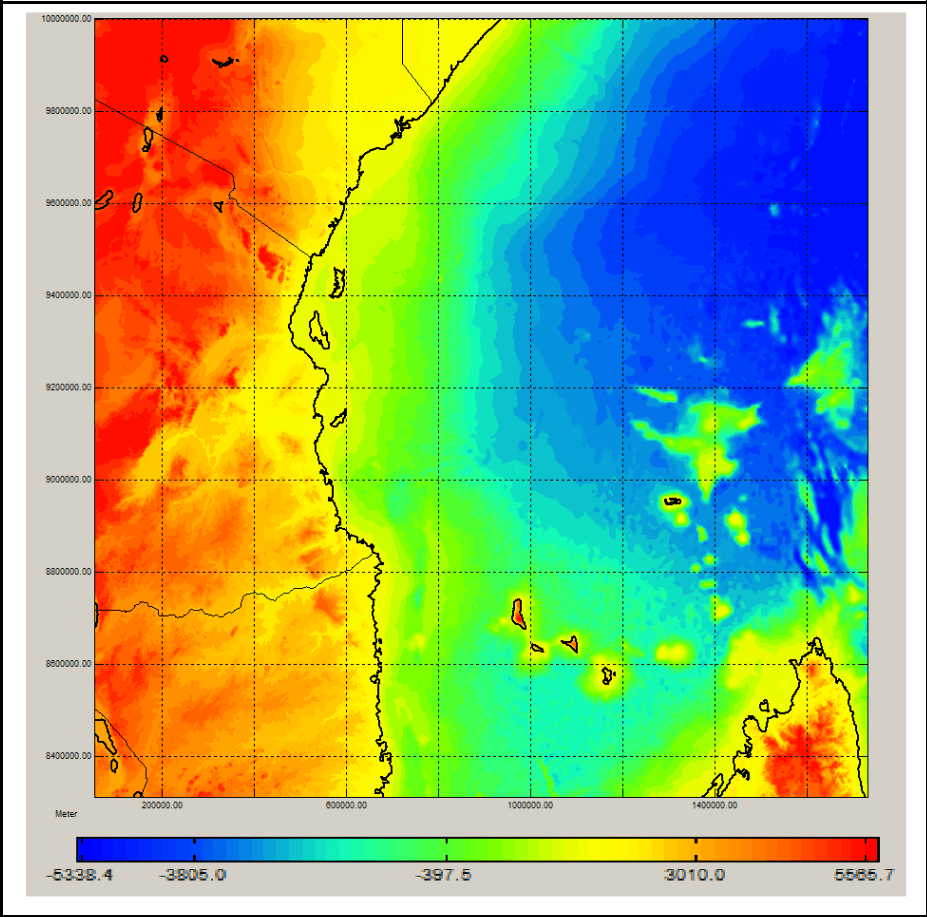 According to Airy-Heiskanen hypothesis, the Earth’s lighter crust floats on the denser mantle, and there are light roots under mountains and heavy anti-roots under oceans. The hypothesis also presumes a local compensation, and a static equilibrium between buoyancy forces acting on the floating crust and the weight of the displaced mantle material. The method determines the depth to the bottom of the roots and anti-roots and provides an estimated depth to the Mohorovicic discontinuity (Moho). The method also requires the assumption of the depth of compensation and the density contrast of the crust/mantle interface. For our project area, the topographic/bathymetric configuration is used as the key element to derive an estimation of the crustal thickness in conjunction with the other two essential assumptions: the density contrast of 0.55 g/cc, and a crustal thickness at the coast line value of 34 km. These two parameters have been determined based on an intensive literature search. We have used Airy-Heiskanen formula to calculate the root or the initial depth-to-Moho surface onshore (Figure 4-a) and offshore (Figure 4-b), then we merged the two surfaces to obtain (Figure 4). 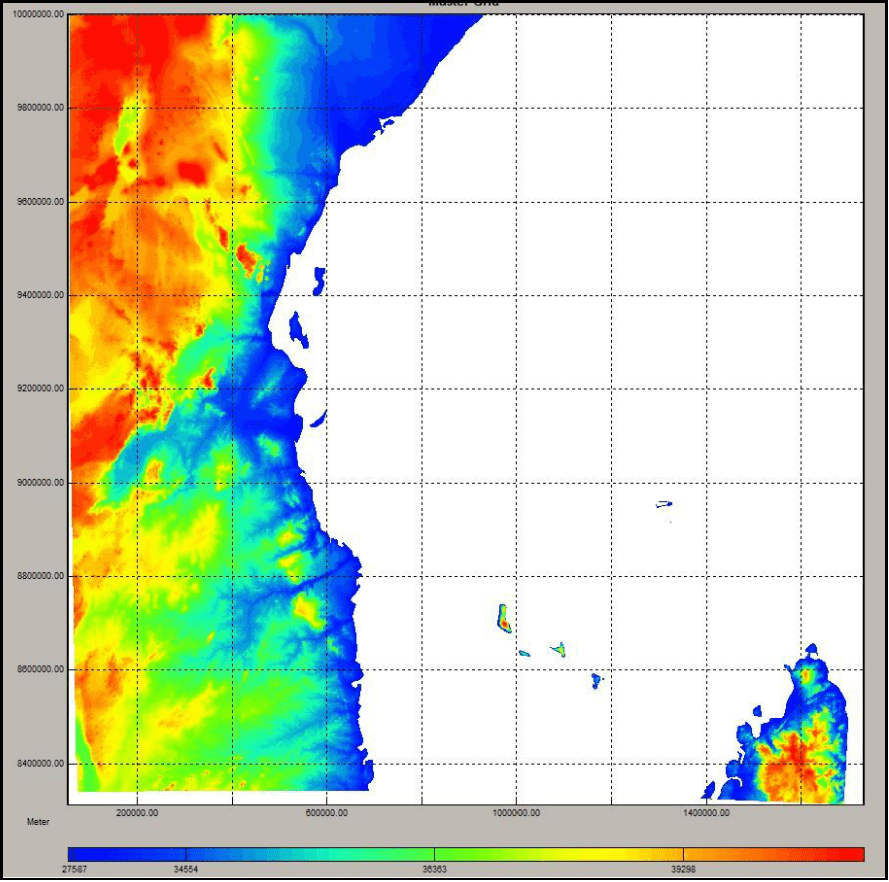 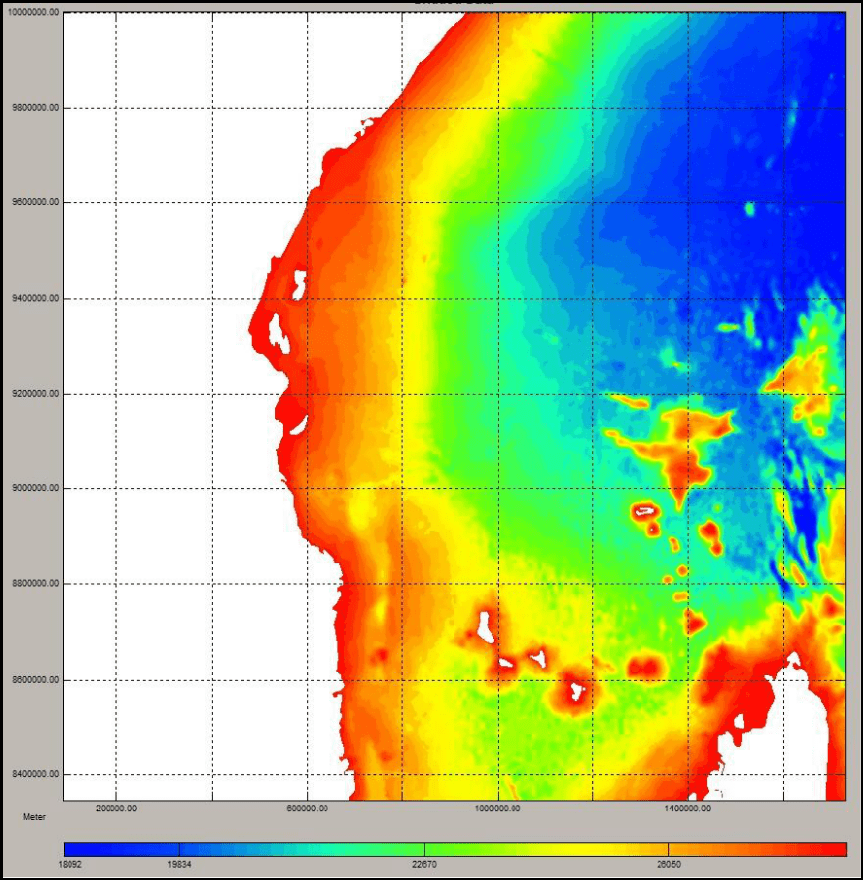 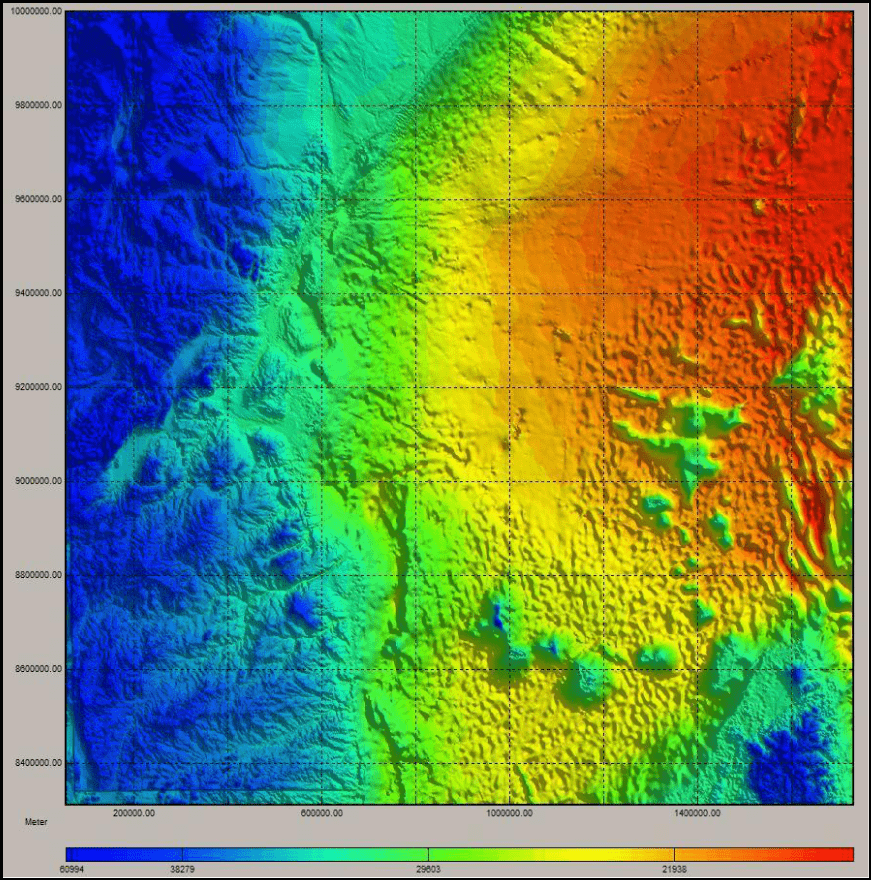 Bouguer reduction or combined corrections require elevation and/or bathymetric data plus knowledge of, or a good estimate of near surface density. Poor quality elevation/bathymetric data or a poor density estimate will degrade the final Bouguer gravity. 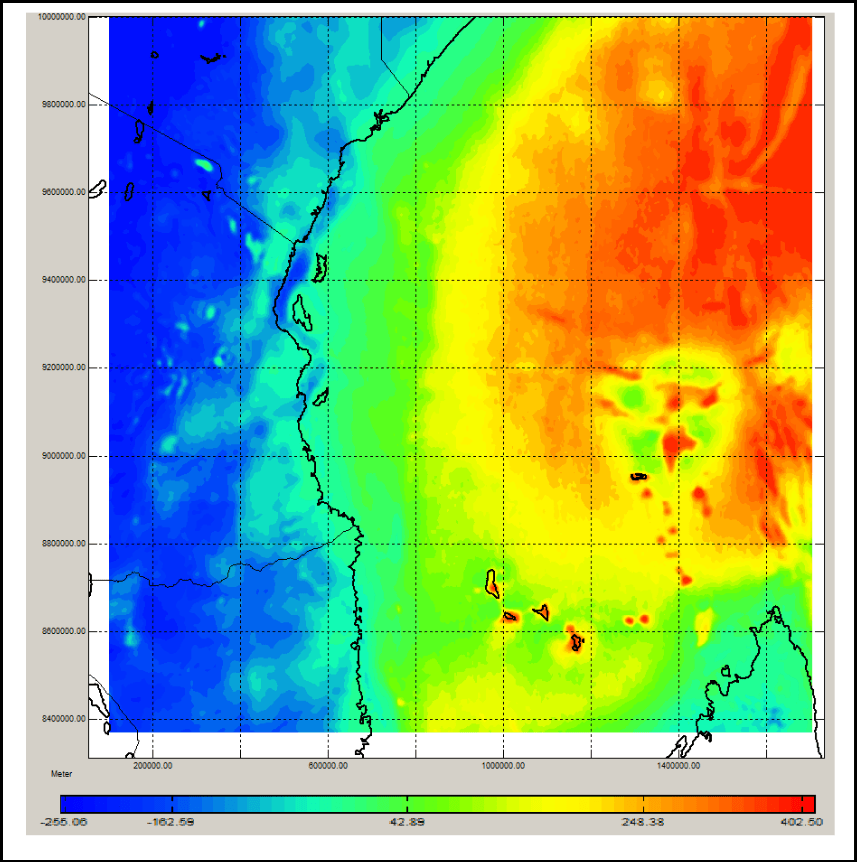 Due to data access limitations and scarcity of depth layers for constraints, the 3D EarthModel was built using four simple density layers. In order of depth they are: 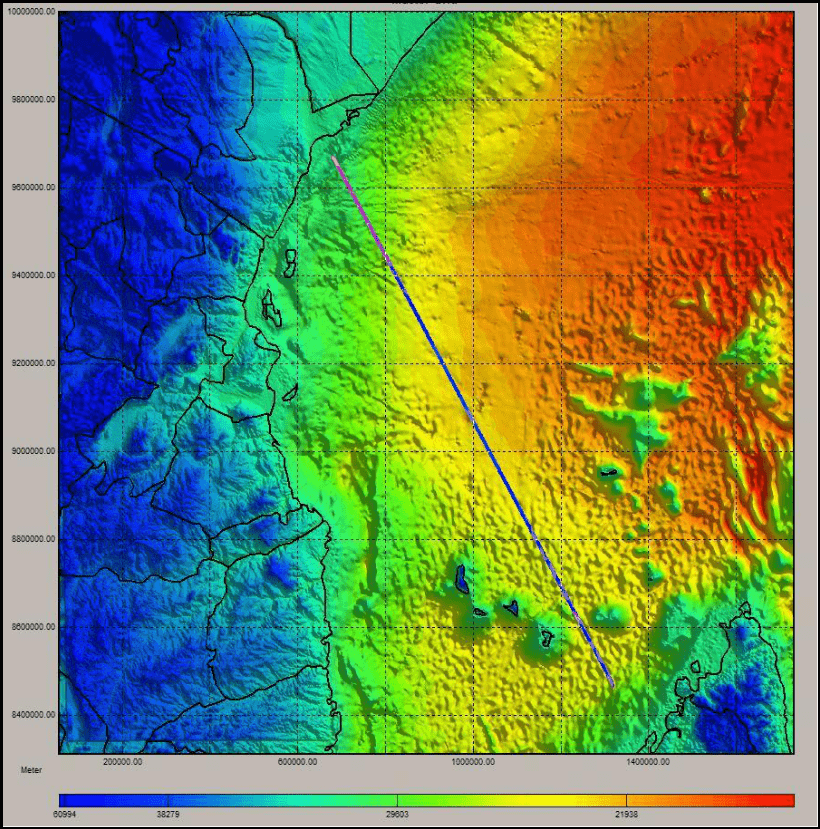 Figure 7: Profile through Initial 3D EarthModel. The mantle is shown colored brown. The Moho surface shown is unadjusted and the observed Bouguer gravity curve is shown.

The Bouguer gravity based inversion was carried out using the simple four-layered 3D EarthModel defined above. The inversion adjusted the initial Airy-root Moho surface until a regional and suitable fit between the observed and the calculated Bouguer gravity fields was obtained. The initial inversion generated a surface with numerous short wavelength anomalies. Analysis of the radial power spectrum of the surface shown on Figure 8 indicated that a 150 km wavelength (0.01 Nyquist) filter was adequate to reduce the short wavelength noise while preserving Moho anomalies of geologic interest. The filter was therefore applied to produce an improved map of the computed surface. Figure 9 shows the profile of the final model after smoothing using the 150 km low-pass filter. 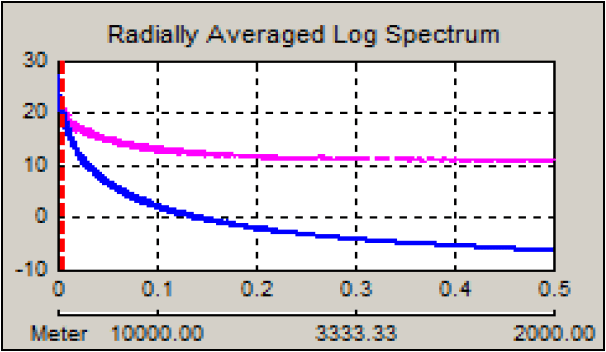 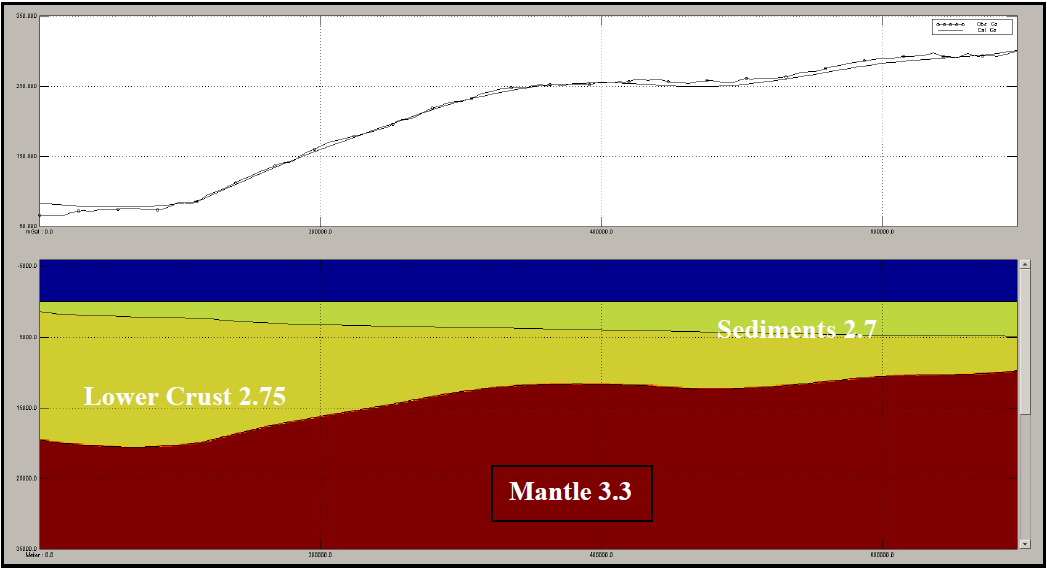 Twenty-three seismic derived mantle depth solutions over the project area have been utilized to constrain the inversion. These depths were the product of the study of the wide-angle reflection and refraction acquired during R/V Vema legs V3618 and V3619 in the Western Somali basin (Figure 10).

The calculated crust/mantle interface surface (Moho) has been mapped using a contour interval of 1,000 meters below sea level (Figure 11). Shallow mantle ranging between approximately 8000 – 14000 meters (bsl) and is located seaward east of the Davie Ridge. The Bouguer gravity (Figure 5)shows the highest gravity field in the Comoros islands, Cosmolido group and the Wilkes rise.As expected these features of high gravity correlate well with the shallowest Moho, which wasderived by gravity inversion and calibrated to refraction and reflection mantle depths deduced fromthe sonobuoy experiment along the Somali Basin. Deepest mantle ranging between approximately14000 – 43000 meters (bsl) is located shoreward west of the Davie Ridge. The map (Figure11)shows a portion of the Mozambique belt where Moho depths range between 37000 – 42000 meters (bsl). The Moho depth of the Mandawa basin, Ruvu basin and Seous basin ranges from 24000 to 29000 meters (bsl). 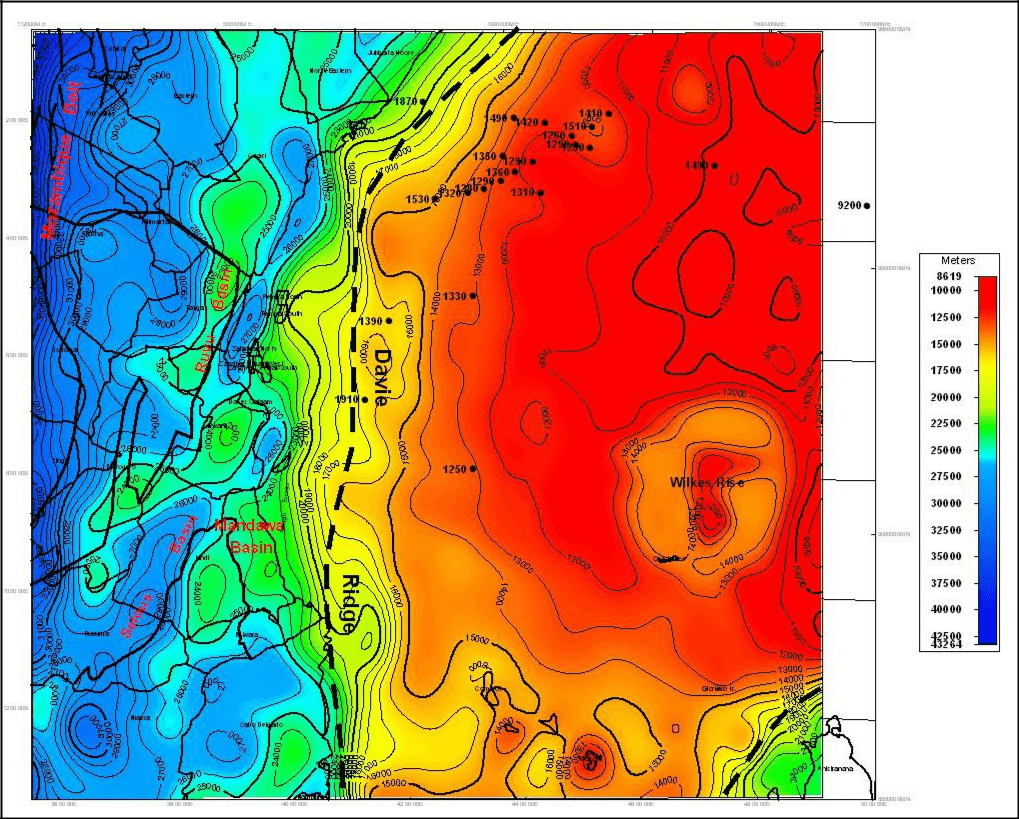 The isostatic residual gravity map (Figure 13) is essential for interpretation of the geology, the map reveals enhanced anomalies of geologic interest removing the effect of Moho surface undulations. The undulations generate strong gravity anomalies or gradients that conceal anomalies sourced within the basement or the sedimentary section. The map is generated by removing the gravity effect of the Moho (Figure 12) from the Bouguer gravity anomaly field. The gravity effect of the Moho has been computed based on a forward gravity calculation using the 4-layered EarthModel described above, where a density contrast of 0.55 g/cc has been assigned to the crust/mantle interface and 0.0 g/cc density to the remaining layers. 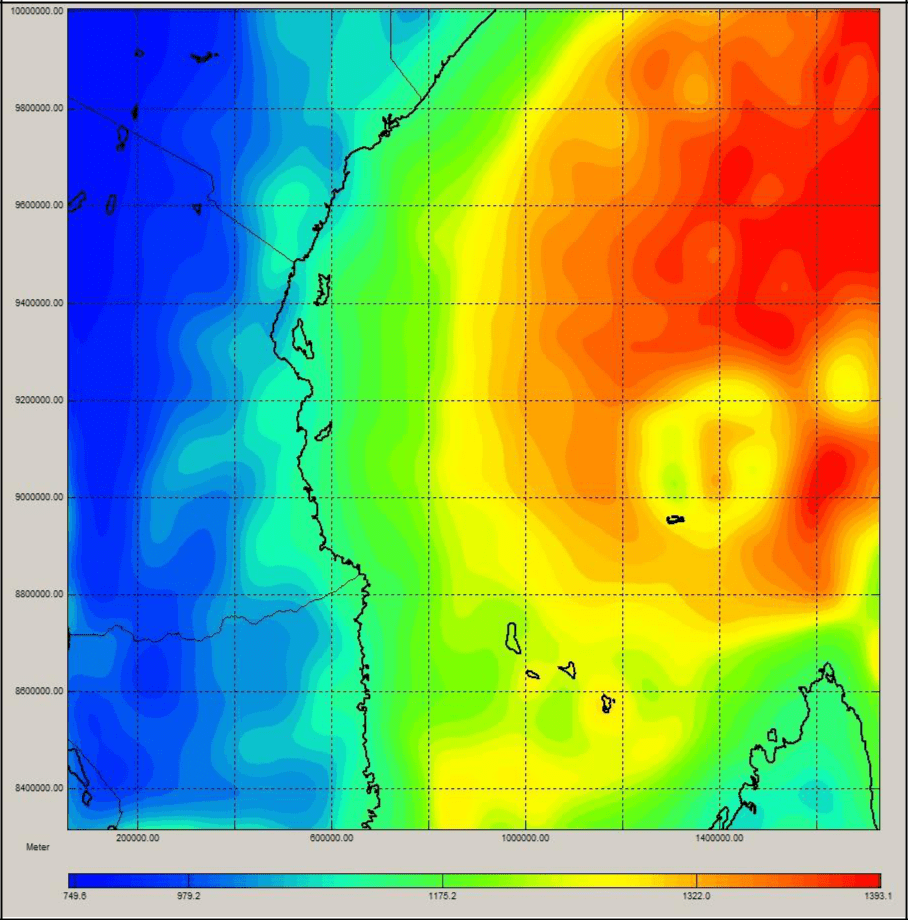 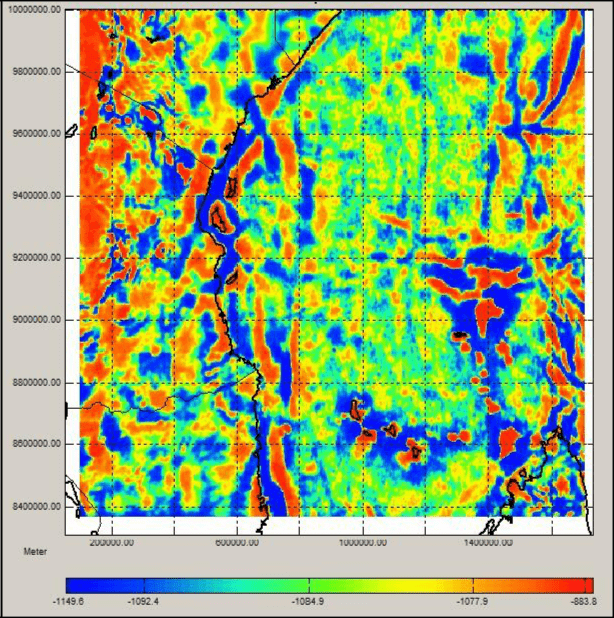 The isostatic residual gravity map could be enhanced by using data enhancement techniques (Module #15 data Enhancement Techniques). The enhancement method we have selected for our onshore/offshore Tanzania project area is a band-pass filter. Our aim is to isolate and target more anomalies of interest and to produce a resultant map sufficient for general interpretation and correlation with regional geologic features.

A band-pass filter can be designed for any gravity dataset to remove: a) unwanted short wavelengths anomalies due to instrument noise or bad recording, mis-positioning of the data point, poor terrain corrections, or abrupt changes in near surface density, and b) unwanted long- wavelength anomalies due to regional gradients that obscure or distort the anomalies of immediate geologic interest. Therefore, we have determined that a 75 – 225 km band-pass filter was appropriate to isolate anomalies of interest that correlate with the available geological features for our sub-set area outlined by the box on (Figure 14). 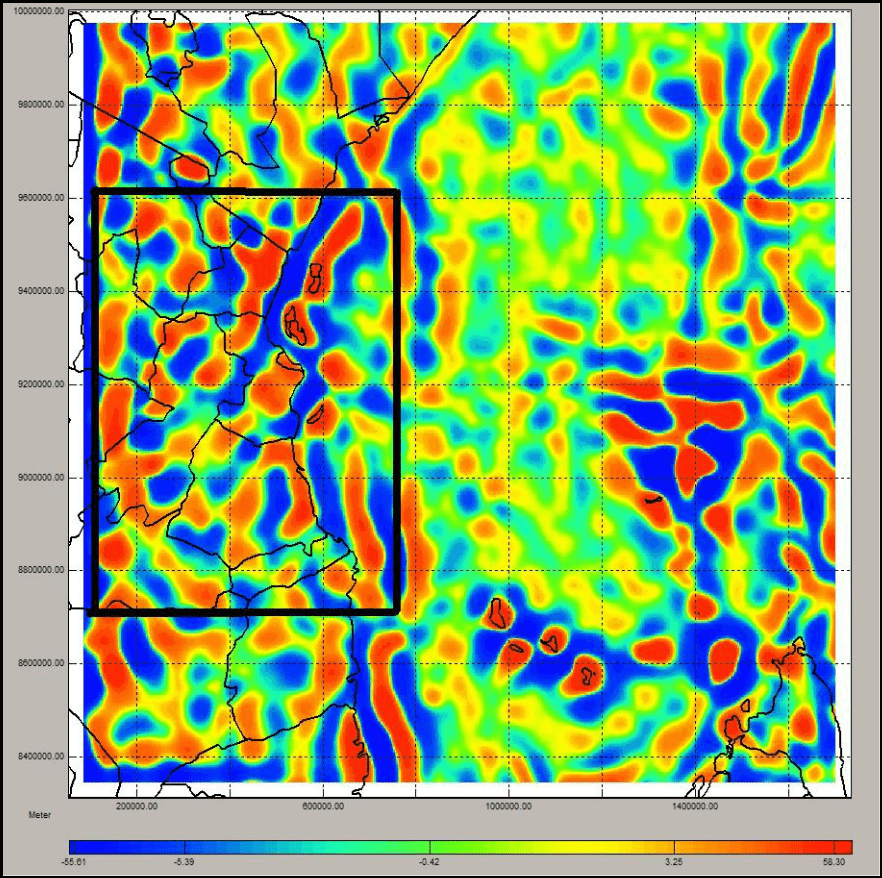 The sub-set area outlined on (Figure 14) is an area with an extensive presence of oil and gas- prone source bed of Middle Jurassic to Late Cretaceous age. The area contains major basins with an average sedimentary section depth between 6,000 – 10,000 meters. There are four types of basins -with a brief decription below- as shown on the band-pass filtered isostatic residual gravity overlaid by regional geologic features assembled from various published articles (Figure 15): 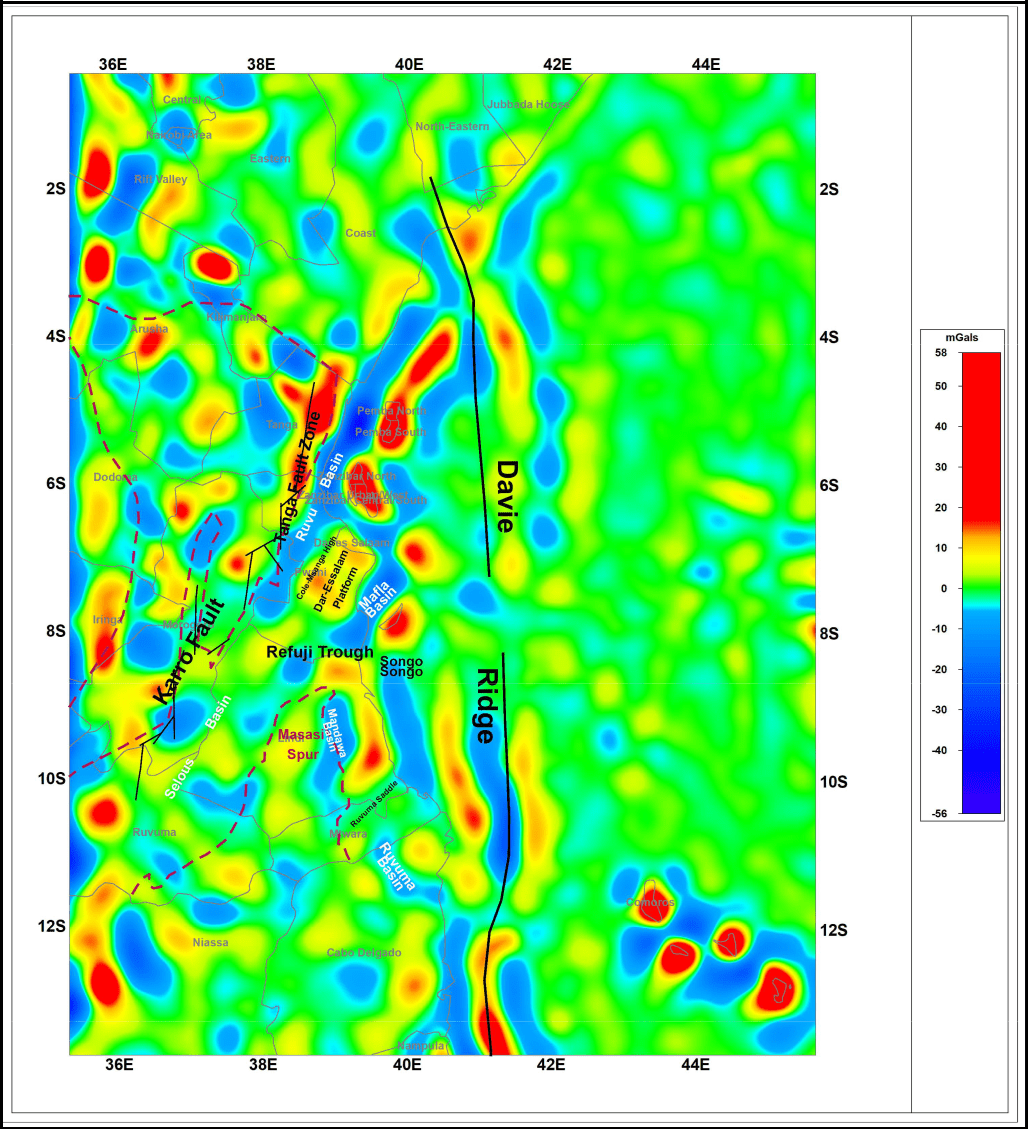